I don’t really get the hype.

Sure, Cole is good, but I don’t get hip-hop-philes’ obsession with Forest Hills Drive. My first encounter with Cole didn’t even directly involve him, as much as the memes Cole Stans would throw around about how he went platinum with no features: 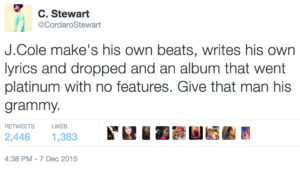 These memes escalated to even circle jerkier versions. Folks outchea calling him the GOAT and I’m like:

Its like a reverse of my relationship to 2Pac’s music. When I listen to Pac’s shit, even if for the first time, it felt familiar because, well, its fucking 2Pac. The expectation of greatness is grounded in the historical context of the music itself. Cole is still new to the game. So, when he dubs himself a god on January 28th, it comes off more tongue in cheek shoulder puffing than theophany.

Expectation of greatness is grounded in the historical context of the music itself.

All that said, I should say: Cole is really good. I’d bet money the first time I heard Wet Dreamz, I did that thing where you laugh at something someone says because their honesty takes you off guard. Who jumps in the studio and say that shit out loud?! The heart it took to do that is marvelous. It’s mad relatable.

I have friends who’ve already started modeling their sound off J. Cole’s work. I’ve heard strangers rap who sound like JC on 03’ Adolescence. Granted, Cole sounds like he’s Mos Def in the chorus, but I don’t consider that a slight – at a time when a lot of older hip hop heads are lambasting mumble rappers and foretelling the end of hip hop, Cole is an anomaly. He is steeped in culture and his dedication to the craft shows. It doesn’t feel like biting, it’s allusion.

The storytelling and vibe in 03’ is, frankly, masterful. It’s difficult to advise without preaching, to drop gems without belittling, but Cole does it in a way that’s as nonchalant as breathing. I’d be fronting if I didn’t acknowledge Cole writes some memorable shit. He touches on the difficulty of choosing a life in Love Yourz, poverty or wealth and the like, and even throws in a few calls to risk vulnerability. And if you’ve never got turnt to the chorus in A Tale of 2 Citiez, I don’t trust your politics.

I recognize this is strange praise. While I don’t dispute Cole is on an phenomenal trajectory, I remain underwhelmed with his greatness. If you read this and just want to say on Cole’s behalf, “G.O.M.D,” I’d understand.

P.S. – Off the strength of Note to Self, one day I may learn to stop worrying and love J. Cole. It’s a pleasure to know someone took the time to simply say, “Thank you,” and you’ve got to show love when that happens.

P.S.S. – Oh, and can someone tell me how he came up with the phrase shallow with the pussy? Like I get what it means but, it’s a weird metaphor. Easy? Maybe. Generous? Sure. But shallow?