What is Kanye without controversy, really?

Before reviewing College Dropout, I’d like to suggest no Kanye album discussion is complete without using his life as a touchstone. We have Ye’s almost fatal car crash for College Dropout, his coming to fame in Graduation, extreme loss in 808’s and Heartbreak, and so on. There’s even recognition of this in The Life of Pablo’s I Love Kanye, a fun track where he catalogues a list of his and his fan’s recollections.

“Ok, cool Knehmo. You keep doing these unnecessary asides. One, why is this relevant, and two, can you just get to the damn album review? You’re writing like you have a word count to reach or something.”
– Disinterested Reader

Well Disinterested Reader, first off—damn, that hurt a little. That said, while I think you have a point, bear with me. Look at whats happening right now with R Kelly’s music coming under fire with the #MuteRKelly campaign because of his alleged sex dungeons and paedophilia. He, along with musicians like XXXTentacion, Chris Brown, and Nelly are being targeted by “anti-hate” protesters requesting censorship at an institutional level. Similarly, the meaning of Bill Cosby’s work and legacy is being rewritten. As numerous black artists and actors are being banned and shamed across the internets, the line between the art they produce and their personhood is blurring.

This isn’t new. I mean, you could look at the introduction of Carmen 16, written by Gauis Valeruis Catullus, for a historic example.* The issue of musical content and the grime found in the lives of those who produce it really gets at the heart of black music, doesn’t it? In an ideal world, Mother Teresa would have dropped the most fire album of all time so we could enjoy it without our guilt ,religiousity, or class consciousness getting in the way. And maybe she’s not even enough, considering she had to fight her her own demons. Literally. Regardless, the fact remains that many of our musical greats, from Eminem’s (ironic) gaybashing, misogyny, and cultural theft to Michael Jackson’s abused childhood and adult paedophilia, are riddled with controversy. It would be so easy to hate and disown these assholes if they didn’t keep crafting masterpieces. Now ain’t that about a bitch?

So far, this is all a disclaimer to make explicit the reality of retroactive continuity. People get into big fusses over retconning Star Wars and the like. I just want to be on record saying the same thing has and is happening to R&B + Hip-Hop. It’s gonna happen to 12 Play, and we should expect it to happen with Kanye’s discography depending on how his ‘16 endorsement of Donald Trump, his ‘18 declaration of slavery as a choice, and his miscellaneous breakthroughs play out over time.

I think this is all a publicity stunt and that Charlamagne Tha God is on point in his analysis of Ye’s character. Kanye is the bold dude that just does shit. It’s what led to the resurgence of these and this: 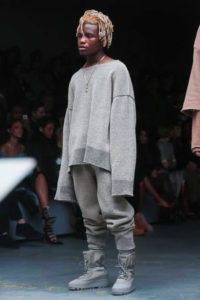 …being peak fashion. On some level, you have to accept the good with the bad; if not, you must cleave them apart entirely. By reviewing content – music or otherwise – the reviewer is already caught in some kind of historicism. Welp, enough theory dear, Disinterested Reader, let’s get into the topic at hand: College Dropout. Also, stop interrupting my reviews.

IT. IS. FUCKING. BRILLIANT.

When people say, “I miss the old Kanye,” I’d bet my income tax this is the Ye they’re referring to. I mean, look at this hit-list:

We Don’t Care: This that 2005 George Bush doesn’t care about Black people in musical form fire. When he says, “We wasn’t s’possed to make it past 25, jokes on you we still alive,” I know niggas felt that. Few things get at the complexity of black life in low income communities like, “This dope money is Lil Trey scholarship!” Damn.

Spaceship: The jump from slaveship to spaceship is Wakandan predictive afrofuturism from back in 2006. Diversity advertisement and racial profiling just a few seconds away from each other is as poignant then as it was now. Yes. All the yes.

Jesus Walks: I’m not saying Kanye is the precursor to mainstream niggas like Chance the Rapper and Kendrick Lamar rapping about Jesus, but I’m not not saying it. +1 for unapologetic Christian apologetics.

All Falls Down: A masterful Laruyn Hill sample, amazing reworking of a poem, a hilarious line about a woman naming her kid Lexus because she couldn’t afford a car, AND THAT’S JUST THE FIRST MINUTE!

Through the Wire: Establishing some quick, low key association to Biggie and a history of his rise to fame amidst hardship. Who else you know dropped a bildungsroman on their debut album? OH ARD.

Slow Jamz, PG-13 version: You know how many children were made to this song?

Slow Jamz, R Version: As I imagine Ye would describe it, “You know how much pussy niggas got off my shit? They owe me some of that. I want my residuals! That Luther sample?! NIGGA. THAT LUTHER SAMPLE?!”

The New Workout Plan: Dem strings? That production? THOSE TESTIMONIALS?! In my mind, this is the song that cemented Kanye West as Kanye West. It’s one of my favorite songs. That funky Zapp and Roger-esque breakdown is one of the best in Hip-Hop. Period. Fight me on this. Now, excuse me as I soul clap. *claps in Bentley Fonzworth*

This album is a masterpiece.

*Also known as Catullus 16, the poem opens with the line, “I will sodomize you and face-fuck you.” Doesn’t tone down much after that either.