Like Father, Like Son feels like it was meant to be the introductory statement on Birdman and Lil’ Wayne, who they are, and what they represent. They’re a family following a code of honor, and we, the listeners, are there to witness it. It’s a good place to get a feel for Wayne’s word-play and Birdman’s boldness. Thematically, LFLS grants us outside listeners a peek into the Cash Money family, chock full of mafioso interludes and lyrics. And Birdman and Lil Wayne’s family is close. Really close. 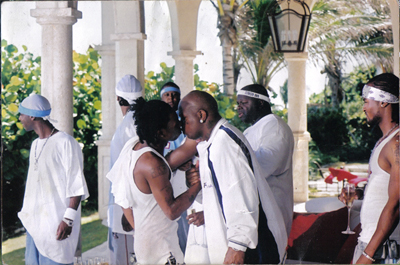 Listening to LFLS in 2018 is also bittersweet.  Some hidden chain of events links the closeness these two had for each other and the conflict between them only a few years later. Today it’s a story of blatant disrespect, ambiguity on the delay of Carter V, and a persistent question of whose shoulders the responsibility for releasing it fell on. Given the close-knit nature of this album, it’s no surprise the inner details of their conflict have been kept so hush hush.  Any in-depth investigation worth its weight in Birdman pigeon calls and “Awh awh’s!” into the Cash Money fallout and the rise of new acts like Young Thug has to address this album, and possibly even begins with it.

1st key slap – Leather So Soft is one of the songs I would have played in high school if I had been getting any play. The Lil’ Wayne / Robin Thicke crossover was ambitious for its time and was the start of the whole other-white-dude-singing-black-music-beside-Justin-Timberlake era, so that’s cool. No really. Don’t forget Robin Thicke started out looking like this, singing a soulful rendition of Beethoven’s 5th just a few years before this album. Army Gunz, Stuntin Like My Daddy and Over Here Hustlin are quick ways to pick OG dope boys and old heads out of the crowd at a cookout. Shit slap. LFLS Wayne is pre lighter-flick, teehee Wayne, but kinda like Nietzsche, his early work speaks of greatness to come. This, to my knowledge, is peak rapping Birdman. That said, Birdman’s adlib game circa 2014 Young Thug’s Lifestyle is fire.

If at any point in the future, I bring GTV vodka to my lips or ride a boat around the Pacific Ocean, best believe I’m pouring out libations for Mrs. Gladys, playboi. 100 emoji. *Rubs Hands*

Final Judgement
I fuck with it
⅘

P.S. Ayo! Birdman had barz! If you doubt me, listen to Stuntin’ Like My Daddy and tell me he didn’t rip his verse.

Don’t get me wrong, I still associate him with that one star dragon ball on his head and hand rubbing, but it was a pleasant surprise to hear him spit more than a Lifestyle-esque soliloquy.