Originally titled Amerikaz Most Blunted, Blackout! is the debut collaboration between Method Man & Redman. Prior to this review, my familiarity with these two as a duo was limited to the album’s singles, Y.O.U. & Da Rockwilder, and the film How High. This album also features the combined talents of two producers who helped jumpstart Method Man & Redman’s careers, namely Erick Sermon and RZA, respectively. Sermon produced the majority Blackout!, while RZA produced Cereal Killer and Run 4 Cover.

I was not aware until listening through this album how much production work Erick had done, as I only knew him through EPMD and his dope song Music. Speaking of EPMD, Sermon gave Redman his rap debut on EMPD’s 1990 album Business as Usual with the tracks Hardcore and Brothers on My Jock. The two’s relationship goes even further back though, to when Redman was DJing & MCing.  Eventually, they formed the rap group Def Squad with Keith Murray and released their album El Niño in 1998. Erick Sermon stayed on to produce each of Redman’s projects up until Blackout! 2. 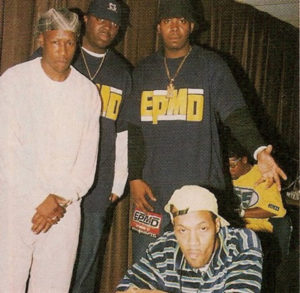 Method Man joined Wu-Tang Clan after meeting RZA, which launched Method’s rap career. Wu-Tang’s debut even boasted a Method self-named solo track. The two’s production relationship is just as strong as Sermon and Redman’s, as RZA has been on the production team for each of Method Man’s projects until his latest solo album, The Meth Lab.

Now my neighbor doped up, got the cable hooked up
All channels, lift my shirt all mammal
– Redman

Da Rockwilder is my favorite beat—a party anthem!  I remember when Sara (Julia Stiles) started finding her groove in the club to this song in Save the Last Dance. The brevity of the track makes it feel more like an interlude than a full song with a run-time of 2:19. According to Method Man, in an interview with Complex Mag, Redman was not a fan of the beat which is why the song is so short.

I did not look at the tracklist before listening to this album, so it was an awesome surprise to hear LL Cool J and Ja Rule featured on this track. LL previously collaborated with Method Man & Redman on 4,3,2,1, a track from his ‘97 release, Phenomenon. Because each of the rappers were on Def Jam at the time of recording, there was ease in collaborating and they all brought their best with hard hitting lines. “Four Seasons” feels like a genuine Def Jam cypher.

“Maaad Crew” really stands out to me. I loved the old-school hip-hop feel, courtesy of Erick Sermon’s production. The flow on this song is slower, and the vibe is more chill, even as the duo go back and forth proclaiming their greatness.

Listening through this album felt like I was in a high cardio workout. By the time “Side 2” was announced in Where We At, I had to take a break. Outside of the above tracks, I was not enthused with this album. Their flow was too fast and too macho for me to enjoy. Many of their tracks were vulgar and over the course of 19 tracks (CD version), this was hard to handle. Songs like Cereal Killer threw me off. I was waiting for references to cereal and they never came. Dark, ironic humor, I know.

I did enjoy the production, however. Every record used was a head nod. Most tracks contained samples from Hip-Hop, Funk, and R&B tracks. There were even lyrical samples like the chorus of Mi Casa from Wu-Tang Clan’s Method Man Remix.

This album isn’t one to be taken seriously and is something to play with the volume turned up in the car or at a party with friends, and I can appreciate that. Method Man & Redman recorded this album while on Jay Z’s Hard Knock Life Tour, so I’m sure making it was fun for these two, wisecracking, good friends.