For those unfamiliar with the two artists, Jadakiss and Fabolous were both put on the map by record producers who owned record labels. Jadakiss’ rap career began as a part of the rap trio The Lox in the mid 90s with Diddy’s Bad Boy Entertainment. During his career, he has also been affiliated with the Ruff Ryders, Roc-A-Fella, and is currently with Def Jam. Fabolous’ began rapping with DJ Clue and his label Desert Storm Records, now distributed through Def Jam.  They both enjoyed hip hop and crossover success in the 2000s with Jadakiss’ Why and Fabolous’ Sweet Dreams singles Can’t Let You Go, Into You, & Breathe.

The first official single from this album was the Future-featured Stand Up. The track has a modern trap feel that was definitely crafted for radio appeal. I don’t think this was the right approach for a debut single though, as “Stand Up” does not stand out. The French Montana song All About It also appeals to current trends.

Another promotional single, Rapture, serves as a much better introduction to the collaboration. If I only heard “Stand Up” & “All About It”, I would’ve brushed this album aside as an attempt at remaining relevant to a younger audience.

After the stagnant progression of “Stand Up”, a video for F vs J Intro was released at the top of 2018. Like “Rapture”, the song sets a more representative tone for Friday on Elm Street. The beat goes hard and I love the switch up in production between Fab and Jada’s verses.

This song demands respect with Fabolous and Jadakiss declaring themselves as separate from mainstream hip hop. This divide in hip hop is very apparent to me, but I hadn’t thought of rappers from the 2000s as “OGs” before, as Fabolous declares on Young OG from The Soul Tape 3.  OG status isn’t determined solely by release date, however, as I would not consider Kanye West an OG, despite his first album College Dropout debuting in 2004. 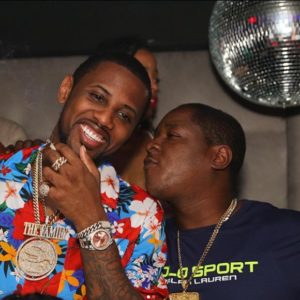 The video for Soul Food followed “F vs J Intro” a week later. “Soul Food” is one of my favorite tracks on the album. The song focuses on staying true to yourself and enjoying more than what is common or comfortable. The lyrics are on point and C-Sick comes through on production that feels like early 2000s NYC Hip-Hop:

Yeah, but it’s all for my family
The goal wasn’t live middle class and buy Camrys
I want us all to eat, even if from my pantry
I guess I’m just more soul food than eye candy
– Fabolous, Soul Food

Before being signed to a major, I had a real key
And I ain’t tryna play you, I’m tryna give you the real me (nah)
Almost twenty years in the game, and I’m still me
– Jadakiss, Soul Food

In mid-February, a video for Theme Music was released. Now this song here goes hard! Swizz Beatz sets up the track with a vocal sample from Marvin Gaye’s Far Cry. Something about a good Marvin Gaye sample makes a song sound like a classic. Fabolous and Jadakiss go back and forth dropping potent bars:

Now your boy’s invincible
Got me teaching niggas principles
It just make me wanna holla
You can’t even get a dollar ’cause I can’t talk sense to
– Jadakiss, Theme Music

Flow smooth over the Marvin
Show and prove over the talking
They told me as a young G
Even when you hungry never move like you starving
– Fabolous, Theme Music

None of these videos transitioned to radio play, which signals a marketing shortcoming to me. The album is very strong collectively and deserves more recognition than it received. Most songs stick to the central theme of staying true to one’s self and producing value for a younger generation. Fabolous’ lyricism throughout Friday on Elm Street, his flow and wordplay, are exceptional. His solo song Nightmares Ain’t As Bad provides a lucid snapshot of his thoughts on his success:

You pay the cost to be the boss, but the price varies
And I ain’t even spitting bars, these is life theories
– Fabolous, Nightmares Ain’t As Bad

In a twist, however, the end of March turned into a real-life nightmare for Fabolous when he was arrested for domestic violence against long time girlfriend Emily B. It is disappointing when a musician’s actions intrude on the impact of their music. I am sure this album and its 2018 summer tour would have received more attention had it not been for personal problems and negative publicity.