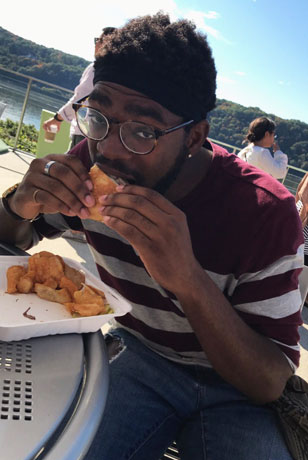 My name is Christopher Williams. I like to go by Knehmo. Its a spin on nemo, a Latin word that translates to something like, “no-one” or “no-man,” and I get a kick introducing myself to people as nobody. I like long walks to thrift stores, appreciate Hennessy, and plan to make a more deliberate effort to show the people I care about that I care about them. But enough about me, onto the music.

Oldheads mention the greats: Jay-Z, Rakim, Nas, Big Pun, Big Daddy Kane, NWA, Biggie, and the like. Since I was born in ‘94, all these artists feel like they’re from the stone ages of rap. <Some transition to a list of personal embrace of hiphop> The summers I remember in Camden were thick with the sounds of Reggaeton, Lil John, and the Eastside Boys. I found and fell for Jersey Club and Chopped and Screwed Music remixes early in my twenties. Dj Noir’s remix of No Feelings by PARTYNEXTDOOR and Travis Scott got me through hard times. If you can really hear DJ Blazee B’s mix of Trey Songz’ Still Scratching Me Up and not dance, you’re probably the FEDs.

Hip-hop has been a big part of my life and I look forward to digging through songs I would have had on my playlists either way.